My must have iPad apps for teaching and learning 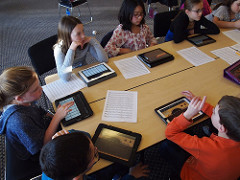 I've read quite a lot of posts recently about top apps to use in the classroom. This got my thinking about the iPads that I use on a regularly basis and what my own list would be. The purpose of this post therefore, is to share with you eight fantastic iPad apps that I regularly use within my teaching. I've deliberately chosen one's that can be used to supplement any subject and can also be used across all age ranges.

I have purposefully listed apps that are simple and easy to use for both the pupils and the teacher. From my experience, apps that can be used in a range of situations, across all age groups tend to be the most effective one’s. All the apps listed here are user friendly, but more importantly, can have an instant impact within the classroom. This is probably the reason why they are so popular with other educators across the world.

So here is my must have iPad apps to use within the classroom...

iMovie iPad app has a trailer mode which is really simple to use and can be used for a variety of different purposes.  It lets you create a range of movie style trailers in different styles. You can customise the studio logos, cast names and credits and add and adjust videos and photos using content from your photo library. As it's coming towards the end of the year how about asking your Year 6's to make movie trailers to advertise the end of year production like these one's here? Or how about asking Year 6 pupils to work collaboratively to create the end of year leavers video using iMovie. iMovie trailers are so simple, they could be used right across key stage one or two. This trailer here for example was made by Year 2 pupils as part of a Digital Leader project.

Book Creator iPad app could be used by pupils as a way of presenting their knowledge in any subject or topic area. The app is extremely easy to use. When creating a page, pupils can add in text, photo's, videos and even sound recordings. There is also a tool to add in shapes and a pen tool to annotate images. Pupils can format their pages by changing the colour and even the paper type. It is also really easy to make text stand out by changing the colour and adjusting other formatting features. Older, more advanced pupils can add in hyperlinks in order to link their text or images to content found online. Once finished, you can either publish finished books to iBooks or share them as a PDF or video file. Click this link here to see the kind of thing your pupils could easily create.

Green Screen iPad app by DoInk is such a fantastic (and cheap) way of creating professional looking Green screen images or videos. All you need is a green background, your iPad and some imagination! I use a large green piece of cloth for projects involving pupils and green card or backing paper when making smaller projects (for example, when combining it with the  I Can Animate app to make stop motion animations). This tutorial I made here shows you just how easy the Green Screen app is to set up and use.

Here are some examples of the kind of thing that can easily be created;
4. Tellagami

Tellagami iPad app lets you create and share a 30 second animated video called a Gami. Once finished these videos look amazing. I often ask pupils to use the app in order to share their ideas on certain topics. Pupils start by customising their character and then add in a background image to link with what they will be talking about.  This video here and this video here was made at the end of a literacy unit, where pupils wrote a persuasive argument on why we should stay or leave the EU.

Explain Everything iPad app is an extremely versatile and flexible app that can be used for lots of different purposes within the classroom. It is basically a screen-casting app which allows narrated recordings of the iPad screen to be exported and then shared as a video. This way, pupils can create their own videos to demonstrate their knowledge and understanding of a particular topic or concept (as in this video here). The app can also be used to create animations such as this one here.

Morfo iPad app can be used to to bring any image saved to the camera roll to life! Basically pupils upload an image and then line up the facial features. Once they have done this, they then record themselves talking in the role of that particular character. In the example below, Year 1 were doing a topic on super heroes. First, they started by writing a persuasive speech to say why they should be awarded 'super hero of the year!' Next, they found an image of that super hero online, uploaded into the app and transformed themselves into that character by overlaying their face, eyes, mouth and nose. They then recorded their 30 second persuasive speech. The finished work can be viewed here (Note: To embed the work on the blog, I created a poster in Comic Life and then put the videos into Comic Life using the app ThingLink). Apps such as Morfo can provide a really fun and motivating way of helping develop pupils speaking skills.

ScratchJr iPad app is a great introduction to formal coding. Pupils in EYFS and KS1 can easily program their own interactive stories and games. This could be tied into any curriculum area. For example, this animation here was made by pupils in Reception class and proved to be a really inspiring way for them to demonstrate the knowledge that they had acquired. Similarly, this animation here was made by pupils in Nursery and showcases what they had be learning as part of their healthy eating topic. As well as developing pupils programming skills, why not have them produce something similar as a way of them demonstrating their learning within a particular topic? This tutorial video from my YouTube channel shows you how easily you can do it.

Shadow Puppet iPad app enables pupils to create their own custom videos. There are lots of similar apps that I have used that do the same thing such as Adobe Voice (now called Adobe Spark Video) and Videolicious. In my opinion however, this is the easiest one to use and I have even had pupils as young as Reception class creating fantastic photo story videos with minimal assistance. Using the app, pupils simply import their images (or videos) and then record narration to accompany them. They can also add in music, draw on the screen and even add emoji stickers. I have had pupils using the app to create videos that re-tell a story that they have been studying class and also as a way of them showcasing their understanding within topics that we have been covering. In Reception class we used the app as part of a Computing lesson, where we looked at algorithms. In pairs, pupils took photos of themselves acting out the different steps involved in brushing their teeth and then recorded themselves explaining the steps involved. This also tied into work that they had been doing in literacy on instructional writing. You can view the videos they made here.

So those are the must have iPads apps that I would recommend all teachers have as part of their arsenal. In fact, if I was starting of my iPad journey again, these are probably the apps that I would look at first. When I'm asked by other teachers about which iPad apps to use, I always say use just a few carefully chosen one's to begin with, so these would make a great starting point. After all, it’s far better to be the master of a few really effective apps, rather than trying to use too many without fully understanding how to use them to full effect. And finally, as with any technology usage, teachers should only use it if it serves to fully enhance the pupils learning.

If you would like any help with using iPads within your school please don't hesitate to get in touch.
JEcomputing
Share